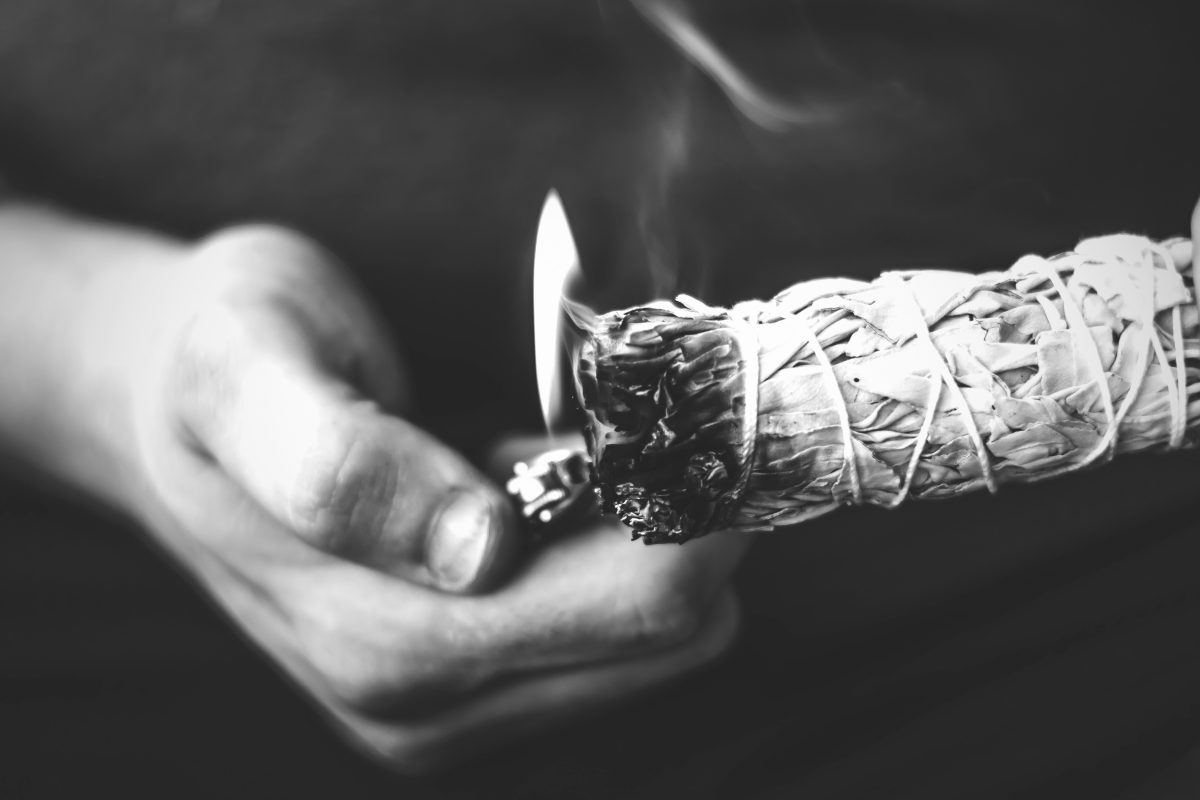 Smudging is a ceremony practised by many of the Indigenous American peoples and those involved with alternative healing practices. The process involves burning sacred herbs and woods, often for spiritual cleansing or blessing.

The use of incense and other smokes to connect humans to the spirit world can be easily traced throughout the East in parts of Asia too. It is still a huge part of day to day life in these regions with offerings to the ancestors laid out every morning and the distinct smell of incense in the morning air.

For centuries, Shamans used sage on their fires as a ritual of calling upon the ancestors. Any conflict, anger, illness or evil was absorbed by the sage smoke to be released or cleansed from the energy field of a person.

White Sage, also called sacred sage or bee sage, is a desert shrub native to the American Southwest and Mexico. Sage is traditionally used in Native American medicine and shamanic practices. White Sage is renowned for its healing, helpful energy. The scent calms the mind and purifies the body. Sage smoke is believed to have the power carry prayers to the heavens, to remove spirits, and cleanse ritual space.

About Cedar
Used by the Lakota,  Cedar is said to purify space by attracting good spirits and removing negative influences. Its aroma is woodsy and fresh. Cedar is often used to cleanse a new home or apartment and is considered an essential herb during the Native American ceremonial season (spring and summer).

About Palo Santo
Palo Santo is energetically cleansing and holds healing properties similar to Sage and Cedar.  In Spanish, the name literally means “Holy Wood”.  It is part of the citrus family and has sweet notes of pine, mint and lemon. For centuries, Palo Santo has been used for spiritual purification and energy cleansing. When burned, it produces an uplifting scent that raises your vibration in preparation for meditation, yoga or healing sessions.

How to use Sage & Cedar:
Holding the smudge stick by the end, use a lighter to ignite the tip. Blow out any flames so that the leaves slowly smoulder. Use your hand or a feather to direct the smoke over your body, around a room or over your crystals. As you do this, visualize the smoke carrying away any negative energy from your life, any darkness or bad vibes. You can also say a little smudging prayer while you do this.

How to use Palo Santo:
Light one end of the Palo Santo stick, hold at about a 45-degree angle pointing the tip down toward the flame.  Allow it to burn for about 30 secs to 1 minute and then blow out.  Just like Sage, you then move about the space your working in, letting the sweet smoke float in the air.

Be careful not to breathe in the smoke directly, and not to fill the area too thickly with smoke. Catch the ashes in a heat-resistant dish. An abalone shell is traditional, but you can use any fireproof container of metal, glass or clay. If you are burning loose leaf sage, the best method is to use a charcoal burning disk inside of a sensor or small cauldron. Smudge sticks can be extinguished in a dish of sand and re-used many times. With Palo Santo, the glow will die on its own unless you blow on the ember which will keep the smoke going.  Always use caution and respect when working with fire and never leave burning smudges unattended.